How To Eat An Egg In A Rebounding Rwanda

In a rural preschool at Rugarama in northern Rwanda, some two hours north of the capital city of Kigali, 90 or so three- to six-year-olds sit patiently on a grassy patch outside a crumbling one-room schoolhouse with only gaps where windows and the door should be. Having sung, prayed, counted, and chanted the days of the week and months of the year in their native Kinyarwanda and English (fluency in which is a national education goal), the children wait for the highlight of the day: a hard-boiled egg.

Firm taps of the shells against a ridge of rock produce a crack. Then the peeling begins. Some children take a bite as soon as the top is uncovered and then continue removing the rest of the shell. Others wait until the egg fully emerges. No one gobbles or grabs. Older children help younger ones. One little girl nibbles the white first and then savors the round ball of cooked yolk.

The eggs are no mere mid-morning snack. They provide an infusion of protein at a critical juncture in child development, particularly for these needy rural children. Even when there are sufficient calories in their diet, protein is often deficient, which can impair body and brain development. Eggs are a perfectly portable protein source with ample shelf-life, even at room temperature, and contain the right balance of amino acids for human consumption.

Distribution of eggs to rural Rwandan preschoolers in the country’s Northern Province is the work of a U.S.-based nongovernmental organization (NGO) called One Egg, working with Rwandan and stateside partners. On the ground in Rwanda, One Egg collaborates with the Anglican Shyira Diocese, which currently operates 217 child development centers, with plans to expand to 325. Of the 217, 15 of these preschools currently receive eggs—a number One Egg hopes will grow steadily through stateside donor support.

The eggs are procured by One Egg from a poultry farm outside Musanze, the largest city in the Northern Province, which is operated by Ikiraro Investments, a Rwandan corporation with backing from American social entrepreneur Tom Phillips, as well as technical support from poultry giant Tyson Foods TSN +0.14% and its Cobb-Vantress research and technology arm.

Significantly, there is no government money here and no foreign aid. Instead, there is the transfer of technology, know-how, and best practices at the poultry farm. The eggs, therefore, reflect the importance of eschewing traditional aid and handouts in favor of empowering partnerships that pursue good works aligned with the Rwandan government’s priorities for development, especially at the lowest socioeconomic tier. As we wrote in our book, Rwanda, Inc., the emphasis is on development that is pro-poor, as evidenced in the 1 million Rwandans raised from poverty between 2006 and 2011.

Admittedly, progress in Rwanda, which is in the midst of a strong comeback since the 1994 genocide—with milestones such as 8% GDP growth, universal health care, 12 years of compulsory education, and the expectation that it will meet virtually all its United Nations Millennium Development Goals by 2015—starts at square one with incremental gains. The same can be said for the Shyira Diocese’s child development centers, where there is far more need than the means to deliver eggs. A harsh example is at Mugera on the Ugandan border where a mud-brick schoolhouse with a dirt floor is accessible only by a narrow rutted track that could never be called a road. There, children recite the same songs, prayers, and vocabulary lessons as at Rugarama, but there is no egg feast at the end. 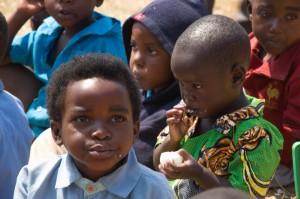 As for those without egg deliveries as yet, the centers themselves, no matter how humble, are at least a start toward attaining the diocese’s four-fold goals, as explained by Bishop Laurent Mbanda: child security, with a safe environment for young children whose mothers work the fields; education, including an introduction to basic English; spiritual development; and nutrition.

Although the need is great, it cannot overshadow what is happening now: the diets of 1,500 rural preschoolers are supplemented with protein. Even anecdotally, children who receive the eggs show signs of physical and cognitive gains.

The intention is strong and the partners are committed to tackle poverty, nutrition, and child development issues among Rwanda’s poor—with more brown-shelled eggs, hard boiled over a wood fire at a rural preschool, resting in the palm of a child’s hand.

Patricia Crisafulli and Andrea Redmond are co-authors of "Rwanda, Inc.: How a Devastated Nation Became an Economic Model for the Developing World" (Palgrave-Macmillan).

View all posts by: Katherine Huske